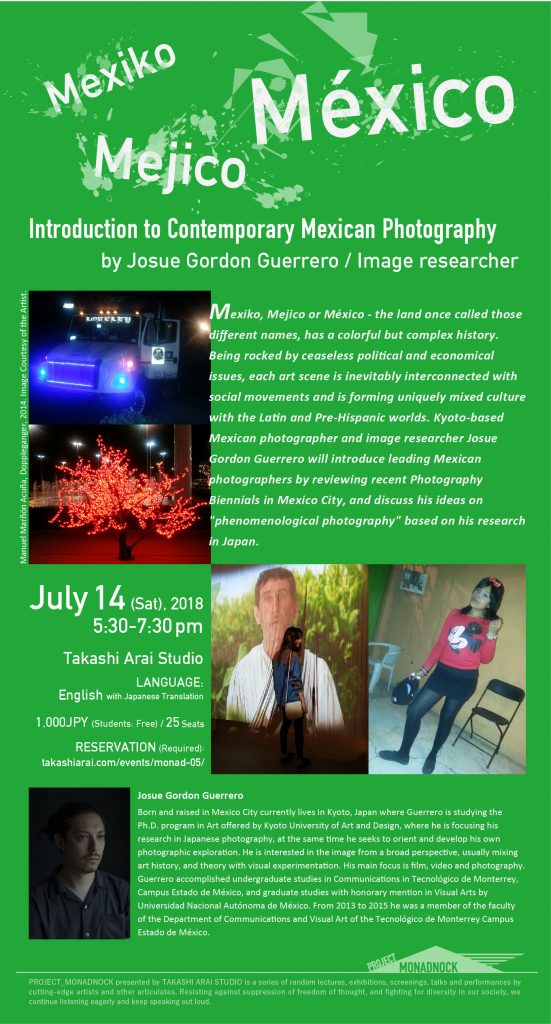 Mexiko, Mejico or México – the land once called those different names, has a colorful but complex history.
Being rocked by ceaseless political and economical issues, each art scene is inevitably interconnected with social movements and is forming uniquely mixed culture with the Latin and Pre-Hispanic worlds. Kyoto-based Mexican photographer and image researcher Josue Gordon Guerrero will introduce leading Mexican photographers by reviewing recent Photography Biennials in Mexico City, and discuss his ideas on “phenomenological photography” based on his research in Japan.

Born and raised in Mexico City currently lives in Kyoto, Japan where Guerrero is studying the Ph.D. program in Art offered by Kyoto University of Art and Design, where he is focusing his research in Japanese photography, at the same time he seeks to orient and develop his own photographic exploration. He is interested in the image from a broad perspective, usually mixing art history, and theory with visual experimentation. His main focus is film, video and photography.
Guerrero accomplished undergraduate studies in Communications in Tecnológico de Monterrey, Campus Estado de México, and graduate studies with honorary mention in Visual Arts by Universidad Nacional Autónoma de México. From 2013 to 2015 he was a member of the faculty of the Department of Communications and Visual Art of the Tecnológico de Monterrey Campus Estado de México.

PROJECT_MONADNOCK presented by TAKASHI ARAI STUDIO is a series of random lectures, exhibitions, screenings, talks and performances by cutting-edge artists and other articulates. Resisting against suppression of freedom of thought, and fighting for diversity in our society, we continue listening eagerly and keep speaking out loud.